No one's reading this anyway, so I'll just say what's on my mind. We know who is responsible for this financial crisis and who tried to do something about it. Barney Frank sat there in congressional hearings in 2005 and lied about the ability of Fannie and Freddie to stay afloat. They (Democrats) lied about F. Raines' ability to manage such an entity. Then congress ignored all the warnings of Pres. Bush and Sen. McCain and others that this was going to fail. It failed and so they want to blame the President's policies, and the Republicans in general. Phoo.

The new deal comes to vote today and they can't get it passed. They even have Bush"s arm twisted so if they pass it, he won't veto it. They have enough Dems in congress that they don't even need Republicans to get it through. It failed to pass. Which means they are so out-of-touch that they can't even get all the Democrats on board.

This deal is bad and if you don't think you want to pay for the crimes and misdealings of Rains, Johnson, Frank and the others, you'd better call your representatives and tell them. Then make sure you get to the polls in November so these people don't get to run the country like they are running Fannie and Freddie.

I especially like Pelosi calling the republicans unpatriotic just when she needs their votes. She can't help turning this into some partisan mudslinging affair.

Wake up people they lunatics are trying to run the asylum.
Posted by Patrick! at 1:36 PM 3 comments:

I just changed the setting for comments. So all of you who might read this blog do not have to have a Yahoo account to post comments. I do so much for you. (LOL)
Posted by Patrick! at 7:19 PM No comments:

The end of journalism

(as we know it) Sean Hannity declared today, that journalism is officially dead in this country. After months of the mainstream press giving Obama a basic pass on every question raised about his past, this same press has sent over 30 "investigators" to Alaska to dig up any possible dirt on Govenor Palin. I must agree with this assessment.

At the same time we rehash all the "acquaintances" of Senator Obama and remember that his usual response to questions are answers like "I never heard the Reverend say that", or "I was only 8 years old when they were blowing things up" , or "yes, I was at the million man march, but I never knew the Father was a friend of Farrakhan's". He didn't do it, know about it, wasn't even there. I'm just wondering if he is really trying to get us to think he's the world's dumbest smart guy.
Posted by Patrick! at 7:01 PM 3 comments:

Okay, so they successfully fired off the Large Hadron Collider the other day. Fifteen Years and 6.2 billion dollars spent to get a 30 second flash of light. This might be the first step in defining the Big Bang. While this is probably important on some geek level, I can't help wondering if understanding how the universe began is ultimately beneficial. Then I started thinking how many third-world countries could have been educated into the 21st century with all that time and money. But I'm sure that I'm missing something here.
Posted by Patrick! at 6:52 PM 2 comments: 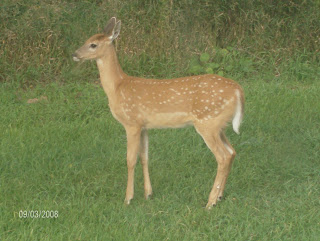 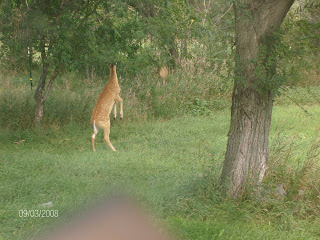 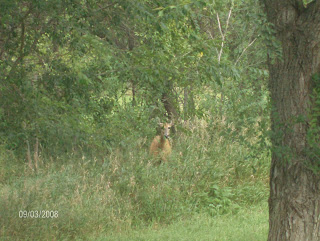 I looked out my window the other morning, and saw this little deer in the back yard. I took a couple of pictures. Later, in the afternoon, it was back. I got a great picture from my window when it got really close to the window. Also one where the babe is up on hind legs grabbing leaves. Look closely in the trees and you'll see mommy, too. The I got one of the mom as she moved around a bit. Cool!

I'm Back! I was off-line for a while because I broke my USB port on the front of my computer where my wireless card is plugged in. I've always had troubles when I had it in the back so I used it in the front. Then we had a storm and that always knocks out my internet. Finally, I moved the card and reloaded the install program and got it working. I just have one less thing plugged into the back, but I never use my webcam anyway.
Posted by Patrick! at 3:27 PM No comments: