Soap Operas. That's what happened to night time dramas. The formula works like this: You have a hero, and he/she has to deal with all the opposition to a peaceful life that comes at him. All well and good, except in a TV production, you can't have continuing characters on the "evil" side without allowing them to skate by many of the consequences of their actions.

On a Cop show, the good guys are the cops, and the bad guys are the opposition and they get caught and are either dead or go to jail. Sometimes they get away and come back, and sometimes they get out of jail and return, but largely, Villians on cop shows are guest actors. In a Drama show, you are trying to have villians and heroes who are on the shows for a while and many times the attempt is for more 3 dimensional characters so the bad guys slowly weave their destruction. But even when they are caught, they somehow stick around to cause more damage. Recently watched shows like Sons of Anarchy, Walking Dead, and a couple of others. The people who cause problems aren't just outed, like they would in real life, so they keep stirring things up.

Example. Walking dead. The main character has an old partner who is slowly going mad. Be fore he finally gets dispatched in season two, I think, he has done quite a few nasty things and soiled a lot of relationships and caused heartache constantly. There is a character who runs a small encampment that is discovered in one season and 1) the people following him never see how destructive he is, 2) Although he finally betrays all his people and kill or damage a lot of others, is still running around causing trouble seasons later.

Example. Castle. A person is killed, and though it takes a while to find out who the killer is, and though the killer might be smart enough to allude the cops or play with them a bit, eventually in a show or two, he is caught and killed or sent to jail. There is an ongoing story of someone who is trying to hurt the characters, but he isn't obvious and not in every episode.

In real life, it isn't very often someone is a trouble maker and all that person's acquaintances continue to spend time around them. Usually, even in the case of a family member, the people around them just go away and the person has to find new circles to cause their trouble in.

A couple of words about Christmas.

I'm just going to note here, that Nelson Mandela has died. He was a great man whose interest in freedom was felt across the Globe. The world was a better place from his being among us.

Who Let The Sun Dogs Out?

From Wikipedia:
Sundogs are commonly made by the refraction of light from plate-shaped hexagonal ice crystals in high and cold cirrus clouds or, during very cold weather, these ice crystals are called diamond dust, and drift in the air at low levels. These crystals act as prisms, bending the light rays passing through them with a minimum deflection of 22°. If the crystals are randomly oriented, a complete ring around the sun is seen — a halo. But often, as the crystals sink through the air, they become vertically aligned, so sunlight is refracted horizontally — in this case, sundogs are seen. 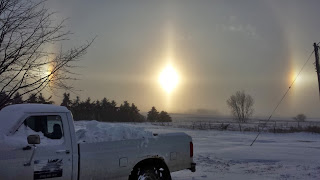 Today as the morning after the storm. There was a bit of snow fallen, but as usual in North Dakota, The problem is always the wind as it shifts the lay of the grainy powder. Most of our driveway was clear with some areas of about 3 inches along it, except near our Garage door. Because my truck was parked there, the blowing snow got caught in between the house, truck, and garage. We had a drift about a foot high stretching out maybe 10 - 15 feet. This required my shoveling it down so we could drive out. Once out, all was well as we ventured to the store and back.

It was a clear and therefore cold day today. Cold icy air after a storm like that is perfect for bringing the ice crystals that create sundogs. It was very pretty but of course, it was very cold with a windchill of -13.

It just struck me. Hugh Laurie as House. Kevin McKidd as Owen Hunt. Andrew Lincoln as Rick Grimes. Daniel Craig as Jake Lonergan. Charlie Hunnan as Jackson Teller. I have no problem with non-Americans in TV and Films made in America, but I've noticed there is a trend for British actors to play Americans. It's great to see them conquer the American accent, But I wonder why it is suddenly so prevalent. There are many, many fine Americans trying to get that defining part. I'm really okay with the diversity of characters as witnessed in the original Star Trek series of the 60s. But they had an oriental play an oriental and a Russian play a Russian. As the series was recreated, this was done many times. But here we are talking about main characters in a series who are Americans played by non-Americans. We're not even talking about someone like Steven Yeun playing an Asian-American which he is, but a Foreign national playing a native born American and not a supporting role. This sounds bad, I know, and the actors I've mentioned are great at their job. It's just a trend I started to notice and wonder if there is an agenda behind it, or what it really is. What really pointed it out to me, was watching Sons of Anarchy, where the bikers are in Ireland and the actors are surrounded by Irish and British accents, and Hunnan's accent starts to slip. I don't know anything here, and I'm not trying to stir things up, I just noticed it and wondered.
Posted by Patrick! at 10:47 AM No comments:

Blogging for the sake of blogging.

December 2nd. I'm sitting here, surfing the web for who knows what. If you are reading this, here's something to try after you're finished. At the top of the page, there is a link that says "next blog". All Blogger blogs are linked somehow through a random engine. Click on it and see where it takes you. After a couple of tries, you might find a blog where someone is talking about something you care about. Fun and interesting.

It's been snowing a bit today. a dusting, but it could turn into something more by tomorrow. I started watching "The Walking Dead" a couple of weeks ago on Netflix, and reached the end of season 3. Season 4 is not available yet. I've decided it's a fun show. More about how people treat each other during a crisis than just a zombie movie. Unlike World War Z, the zombies just walk around until they become aware of someone, but they don't rush and swarm at people on the TV show as they do in that movie. They are just always around and a constant problem. The real bad guys are the ones who would use the opportunity to subjugate other people. Oh well.

I found out, that the lead actor, Andrew Lincoln, is British, and married to the daughter of Jethro Tull's Ian Anderson. huh.

Tomorrow is the 3rd. It is my sister Suzanne's birthday. Happy Birthday again, sis. She's living the dream in the land of coconuts, pineapples, and macadamia nuts. Not to metion the original Five-O. Book 'em, Danno. 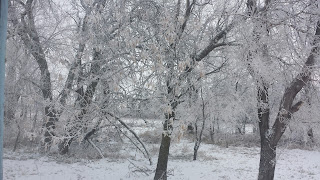