Okay, it's fine that the liberal Nobel committee chose Gore for the prize this week, but I'm amazed that the NY Times op-eds all still mention that the think Bush stole the election. This is just stupid. I pick up a newspaper to read an editorial and they thumb their nose at Bush 'cause Gore got the prize "despite" Bush stealing the election. Hey! Libs! You Lost fair and square, get over it! Go on to something else. Like How Bush went into Iraq for the oil. Yeah, we believe that at $3.00 a gallon. There is no more substantial proof of global warming than there is for evolution. But I digress, If the prize exonerates Gore and demeans Bush, why continue to whine about what you can't change? I just get angry that the media doesn't seem to be able to reason coherently. Media Matters just released an article making like Limbaugh, O'Reilly, and Malkin are being mean in their editorals. It's a lie and more twisting of the truth. Go to their websites and find out what they really said.

The whole point here is that the liberal machine is trying to discredit the entire right so as to trick decent folks into voting for Democrats. It is just going to get worse as election draws near.

I'll tell you what, you keep on talking about how insensitive we conservatives are while you keep killing unborn babies. Keep telling us how we are to hard on criminals while you keep letting them off with probation and short jail time so they can continue to kill and rape. Keep calling us racists while civil rights started with the Republican party and Lincoln and you keep enabling minorities to be less than they can be with your expensive social programs. And, keep telling us we should try to talk to the Muslims while they continue to bomb and terrorize the world.

"But he, knowing their thoughts, said unto them, Every kingdom divided against itself is brought to desolation; and a house divided against a house falleth." - Luke 11:17 KJV

Why is it, that when people of opposing views get into a discussion one side always reverts to name-calling? Sure, I love to call people names, but I don't use it as reasoned argument. For example: I may call "you" (no one in particular here) a pinko because of your leftist views, but if we're discussing partial-birth abortion I'd try to explain why I feel it's bad to poke a needle into a half-born baby and suck out it's brain. I'd then say that I don't understand why why you can't see it that way. I'd never just call you a baby-killer as if that explains it all. However, If I were to oppose illegal immigration, I'd be called a racist. If I say I don't think people are born homosexual, I'm a homophobe. Etc. You get the point here? We may never agree, but we must state our beliefs and discuss not just brand each other with meaningless labels. I have never understood why someone like Rep Kennedy has an accident under the influence, he gets a ride home and says he's got a problem and is going to rehab and all's forgiven. But if a republican is caught doing bad behavior (Larry Craig) He's a hypocrite and needs to be removed from office. Okay, so us Christians have a code we expect ourselves to live by, but it doesn't mean we don't do bad things at times. Does this mean the left doesn't have a code of behavior? Is that why it's okay for such actions? If we are expected to be accepting of gays, why is it that every time a Republican displays gay behavior, he's attacked for being gay? Yeah I know Craig was on a commitee that was trying to prevent gay rights, but just because he leans towards such behavior at times doesn't mean he thinks special allowances should be made for people because they declare themselves gay. If he was completely okay with such behavior, he wouldn't have felt he had to hide it. Also I think he loves his wife and finds her attractive. You can be a member of a group (behavior, race, creed, etc.) and still not feel it entitles you to special treatment. So, okay I'm a poop-poop head and you don't agree with me. I think you are a cool-aid drinker. Now that we have that out of the way what should we talk about? Just because I think you are wrong doesn't make you a bad person.

Wow! was that a disjointed rant, or what?

It's getting colder here. Got the other two horses back. We're trying to get them acclimated to each other again. I work for a company that makes fiberglass wind turbine blades. In fact, we're the biggest in the world and a gobal company. I run up and down these metal catwalks all day and trim fiberglass with a 14-inch long pair of scissors. A bit different than restaurant work. 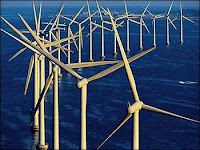 This is a picture of a wind farm off the coast of Spain. The blades were made by our company. I'm not sure what size they are or which plant made them, but I might be able to find out. Competition in this field is intense so I'm not going to tell any processes but we do have a lot of pride in our work. It's just fun. I really enjoy my job. I complain as much as anybody I guess, but the bottom line is that the work is really not that hard, they pay good and I work four days a week.
We make blades that are 37, 40, & 42 meters long. I make 37s. There is a single wind tower near my town here, and I'm told it has 25s. We made those about 10 years ago.
I'm going now, so write, people and lets get vocal!
Posted by Patrick! at 6:57 PM 2 comments:

It has been very wet and rainy. I'll have to finish the yard chores soon and start on winterizing the house. I saw a couple of articles in the Grand Forks Herald about the race. Hillary is in front and they say it means a lot but they are still cautious. Then they say Guliani is in front of the republicans but it doesn't mean anything. Yeah. Ann Coulter has a new book coming out or just out. I'm sure a lot of people on the left will be attacking. Hey! why don't you guys attack Michael Savage like that. He's just a hater, but free speech and all. I want to rant about something but haven't gotten worked up about anything specific yet. Chargers finally won their second game so I'm happy about that. Just crushed the Not-So-Orange Crush. Blah, Blah, Blah. Give me an idea guys.
Posted by Patrick! at 7:17 PM 2 comments: