It happens all the time.  They want to get you to watch and once you see the story, they want you to remember it in the grisly details they portray it with.

A news story accompanied with video spoke of this man whose boat (row boat) had overturned and he had to hang on until help arrived.  The text of the report was that he was desperately hanging on in the rough water.  Well, in the video, the man was sitting on top of his overturned boat gently rising and dropping a couple of inches at a time.  The situation didn't seem desperate, the man didn't seem to be having difficulty keeping his seat.  But to hear the report, you'd think it was very traumatic and touch-and-go for the man.

There was an opening on a news report for an upcoming story. It spoke of the horribly unsafe conditions of our nation's bridges and the huge cost of fixing them.  I was sure they were pointing fingers at all the bureaucrat's who have neglected their civic duties at the possible cost of human life as well as the need for more federal dollars to be collected for repairs. The article stated the example of two particular crumbling bridges.  I-35 which collapsed in Minneapolis in 2007 and the Famed Tappan Zee bridge which spans the Hudson river at it's widest point.  Here's the thing.  As horrible as the I-35 collapse was, it did so not because of neglect, but an inherent design flaw.  The second issue was the Tappan Zee which has not collapsed, is still in use, and -wait for it- is currently being replaced by a completely new bridge being built right alongside of it.  So, for all the chest beating and hysteria, The two biggest example of this "problem" either don't fit, or contradict the premise that no one is fixing them.  Dumb.

Finally, what got me riled up today.  A news story about a man who was trying to rob a bank today. Throughout the article, the TV showed a frame from the surveillance cameras of the man. It was a pretty clear picture.  The announcer said his apparent age, height, weight and the clothes he was wearing, which was clear in the photo, and that was it.  But wait, in the photo, it was clear he was an African-American.  I'm sure, they didn't want to stigmatize anybody by stating his race, but skin color is a physical characteristic that separates one person visually from another.  It was an important fact, and wouldn't have been slanderous in any way to mention it.  I wonder if they would have mentioned it if he had been white.

It's bad that we as citizens have to really watch what we see and think so deeply about such things, but it's part of the responsibility of being an aware citizen.  Do you not think,though, that the press has some responsibility here as well?
Posted by Patrick! at 6:35 PM No comments:

The Walking Dead - A review

The Walking dead. What could be worse than a world completely shut down technologically, and populated with many, many more undead zombies than living humans?

Well, you know that idiot that hangs out by the water cooler all day instead of getting his work done?  The work you'll end up doing because the company has deadlines?  Assuming he survives the initial onslaught of people dying and eating each other, How is he going to behave when it's just you and him with the zombies approaching?  How about all those people who always seem to get into bar fights, even going to bars and getting drunk so they can start them, going to behave when they band together to attempt survival?

On AMC's "The Walking Dead", you find a small group that bands together not just for survival, but for the survival of the kind of ideals that create a civil society.  It's true they have to stoop, maybe just bend to a level none of us ever want to think about getting to, but they have an intrinsic unspoken feeling that if "they" survive, some basic human values have to be preserved when the new society can finally be rebuilt.

So, you have to ask yourself how you would act in these situations.  If you're a Christian or just a person who doesn't believe in violence, how do you reconcile trying to survive with people who wish to climb over your corpse to get theirs?

During the first 5 seasons of the show, The main characters go thorugh many trials for survival and quicly in the show it becomes apparent that the zombies are only a problem in large numbers.  The real evil in the world are the survivors who will take what you have, whether it's shelter, food, or just a stupid stick you are using to keep alive with.  The age-old struggles of power, politics, and wealth all survived the great zombie transformation and it comes down to who has faith and hope in people and God, and who has given up.

Even the heroes in the story, who do not think of themselves as heroes, are finally cornered and stuffed in railroad cars.

Let me say some background.  Rick is the main character.  He was a state trooper in Georgia.  A man of conviction and a family man.  He is injured in the line of duty and is hospitalized.  This happens before the outbreak, so when he finally comes out of his coma, He is like the viewer, completely unaware of what the world is like.  He discovers it as he searches for his family and brings us all along with him.  Of course, terrible things and losses happen to everyone on the show and Rick Grimes is no exception.  The writers have a way of enduring people to us just before sacrificing them to the God of ratings.

At the end of the fourth season, Rick has finally had it with walking the line between being a protector of the people and the leader of his group whom he desperately wants to save.  So, in the railroad car at the end of season four, after all that has happened to them, This happens:

RICK: (looking out a crack in the wall) "These people are going to be very surprised."

RICK: "They're screwing with the wrong people!"

I've been binge watching and have seen five seasons.  I can't wait for season six.

THIS IS MY STORY AND I'M STICKING TO IT. 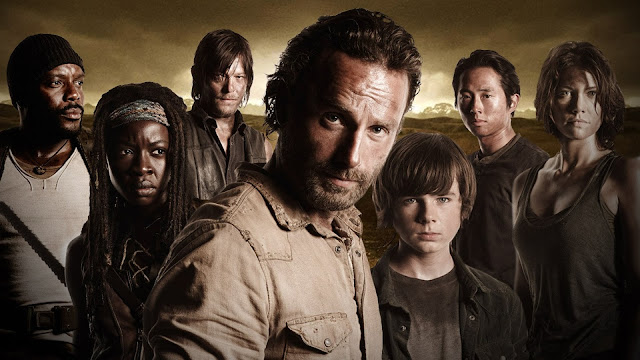 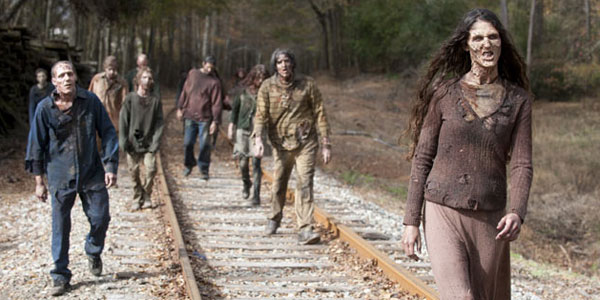 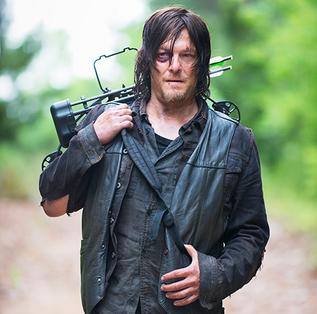 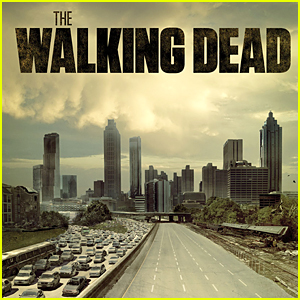