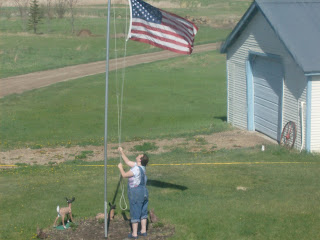 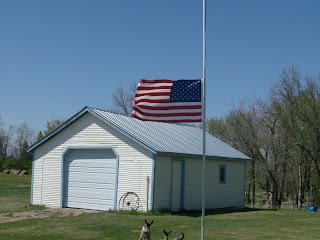 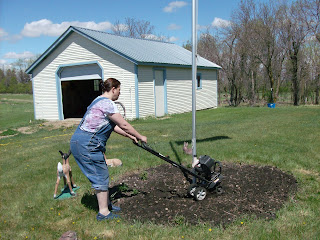 Here's a couple of pictures of Laurie putting up the flag. flown at half mast, and tilling the pole garden. She seeded it with a red, white, and blue flower mix. Very patriotic and cool!

I got a bit behind. It's been a busy week. Here's a couple of posts and I'll get some more in soon.
Posted by Patrick! at 9:25 PM No comments: 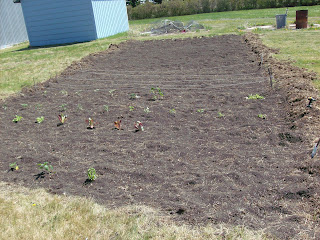 Well, I've been Roto-tilling a garden and Laurie planted some veggies. We got some frost that night (Yuck!) so the seedlings mostly died. But we will plant some more. It's fun.
Posted by Patrick! at 9:15 PM No comments:

"Let every nation know whether it wishes us well or ill, that we shall pay any price, bear any burden, meet any hardship, support any friend, oppose any foe, in order to assure the survival and the success of liberty."

On Memorial Day, Laurie and I went to Devils Lake and participated in the ceremony done by the local VFW. (Laurie is an honorary member of the Ladies' Aux) The Elk's band and a choir performed as well as bagpipers from Fargo. The Air Force Honor Guard from GFAB performed a MIA/POW tribute. We, along with other veterans and Gold-star parents placed wreaths on stands to signify soldiers lost is all the modern wars WWI on as well as DAV (Disabled American Vets) and VFWs. It was moving and tearful but we appreciated being part of it again and appreciate the VFW more than I used to. Here are a couple of pictures. 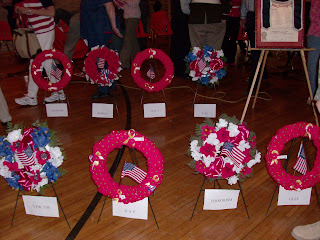 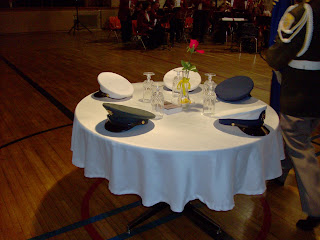 Yes, I finally finished the last Harry Potter book. I'm not a huge fan but they are intriguing. I got into them because My sister-in-law was reading them to my daughter when they first started. I saw the first couple of movies and then my wife and I did a couple of audio-books. The story line has been good enough to keep my interest and now I'm done with them. I will never be a fan of Rowling as she stated in a press conference one of he things she built into the background but never put in the actual books was that Professor Dumbledore was gay. It made no difference to the story and was completely unnecessary to put in. It was publicity all the way. A bad move - I say.
Posted by Patrick! at 6:59 PM 10 comments: 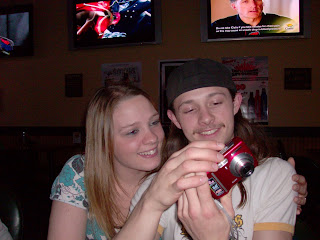 Here's my boy Alex and his girl Kay-Cee looking at her camera. No comment on the picture he just took with it. We had a good time. Went to a couple of places that were a little more subdued. Played some pool. Fun with the kids on his 21st. Nice.

Ahh! The sights of Spring... 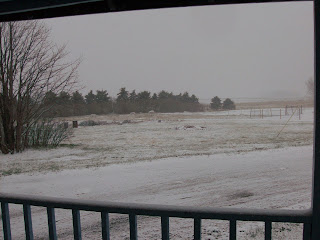 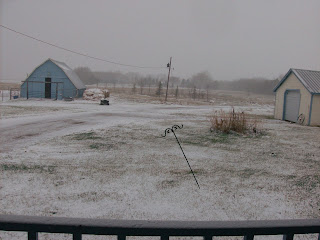 Well, here we are on this bright day before Mother's Day in May. The Birds are shiverin' and hiding because we got quite the dusting of snow last night. It will melt pretty fast though, because it'll get up to 50 or 60 today. But this can be a shock for people not used to this area. Cool enough, though. I took the day off to work around the house. It is supposed to be my day off anyway, but I've been working a lot of Saturdays. This guy from work called me this morning and asked me to come in, but I said no. I like the money but they really have to hire some more people for the weekend shift. The shift is three 12 hour days plus pay for the other 4 hours to make 40. Then you get four days off. I would do it if I didn't want to go to church on Sandays.

A quiet kind of day (wait for it)

We're having a quiet day, kinda. Our church is doing the graduation recognition dinner soon and the wife is preparing a CD of pictures of Eliza for the presentation they'll do. 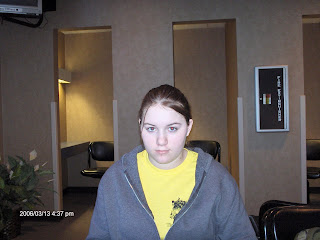 This one may be included. Isn't she cute? This pictures name is, "I said no pictures"

Anyway Alexander is 21 today so my wife and I, Alex and his girl are going out tonight to celebrate. Eliza has volunteered to be the DD as she just turned 18. Sweet girl. I'm sure I'll have some pictures from tonight and I'll try to post some of the less embarrassing ones.

Been lookin around tryin to add some new features to this blog. I added a counter at the bottom of the page and a weather sticker. I think it will show my local temp. If it shows yours, please let me know because I want to.

There is a new link added. Legacy.com has information on wounded andfallen soldiers. Check out the page. My son is listed and we thank them for their devotion to those who serve.
Posted by Patrick! at 8:04 PM No comments:

There's never a cop around when you need one

I'm sitting at lunch today having a conversation and I say how I'm getting S&T of all these loudmouth countries starting trouble in the world. For example, all the ones who abuse or murder their own people while living in the lap of luxury. Venezula, Cuba, North Korea, China, Iran, Iraq (during Hussain), etc. Every time one of these guys starts trouble like starting a nuclear weapon program, we act concerned and send in diplomats from here or the Useless Nations to try to talk to them. They don't listen much and seem to have no motivation to take us seriously.

Maybe we need to just act like the world's strongest nation and kick some butt. I don't mean invade and try to take over, just capture some leaders or something. When Kim Jong Il was messing around with missles, we should have just blown the missles up, slap him on the wrist and said "no".

Remember when we were kids and Dad said "Don't make me come up there!" We knew it was time to settle down. Parents didn't come up and try to negotiate or persude.

So this guy says: "Do you want us to be the world's policeman?" This is one of those liberal statements that you have to back down to or you look like a bully. But Hey! These countries are messing with the peace of the world. This being the same world that they want to be an economic part of. So I had to answer " yes, I do." It's in our own best intrest to have stable countries in the world and if they want to sit at the grownup's table they need to act like grownups. Otherwise it's out to the woodshed for a little applied learning.

Maybe you think it's tragic to be punished for misdeeds, but the people and countries in this world need to be held accountable for their actions and responsible for their citizens. Maybe in a short time the U.S. will be able to stop losing it's children if we make it too expensive to not listen.

Then maybe the U.N. can join in with a real peace keeping force and not a bunch of toothless old men afriad of their own shadows.

Yeah, you might not agree, but you can always move to Spain where they historically give in to pressure.
Posted by Patrick! at 4:31 PM 2 comments: