Does it make you angry or sad? At church today they were using a photo of NYC as a background for song lyrics. It dawned on me that I was becomming angry looking at the photo which featured the twin towers.

I am angry because some third world thugs came here and destroyed them. I am angry because after eight years they haven't been rebuilt. I am angry because the national debate is controlled by cowardly people who 1) are afraid of those who would oppose us and 2) Hate their own country for prospering beyond all the other peoples in the world by their own hand and feel somehow it isn't fair just because we were willing to work for it and others aren't.

Every country makes mistakes and injustices in their growing, but haven't we done far more good in the world, gone out of our way to correct things? All of Europe owes it's present existance to our efforts and sacrifice. Many Asian countries do too. We have spent more in resources in Africa than any other country. We have tried to stop the drug, human, and gun trades in South America as well.

Are we meddling or are we trying to help other's have what we have. Don't condem the U.S. for trying to help spread democracy and then say what we have is so good we should allow everyone who wants to come here and live off us without any pledge of allengience.

Don't try to talk to me about how wonderful it is in Cuba, Venezuela, Iran, China or North Korea. I'm getting damn tired of the mealy-mouthed liberal voices in this country whining about what bullys we are. Let them go to one of these socialist countries and build their paradise there. If it works, then we'll consider it. Believe in God, The Constitution, and the principles of the Founding Fathers. Be thankful for the blood spilled across the globe for the sake of freedom and democracy. Be amazed that we are the strongest but the most giving and charitable nation on Earth because of it. Do this or leave! 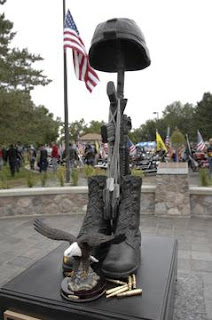 September 11,2009 Fraine Barracks, Bismarck, North Dakota
We awoke around 2:30 am to a thunderous rainstorm. Getting dressed Laurie, myself, Alexander, and Eliza left the house for a long trip to Bismarck, ND. We had been invited to participate in the dedication of the North Dakota Memorial to the Fallen in the Global War on Terrorism. We arrived 7:30 am at the Adjutant General's Quarters at Fraine Barracks in Bismarck. Treated to a buffet breakfast, we had a chance to meet and converse with the Adjutant General, The Former AG ( Who had been at Jeremiah's Memorial in Devils Lake), The Governor and his wife, members of the ND Patriot Guard, and other Gold Star family members.
Outside, the ceremony started at 9:37am, the time of the beginning of the attacks of 9/11, with the ND Patriot Guard riding in. Colors were posted, the National Anthem sung, some opening remarks by City Commissioner Connie Sprynczynatyk, wife of the Adjutant General, and an Invocation by the Chaplain Major Johnson of the ND National Guard.
Remarks followed by Governer Hoeven, Bismarck Mayor John Warford, Major General David Sprynczynatyk, City Commissioner Steve Schwab, and Mrs. Diane Ferderer mother of fallen soldier Specialist Dennis Ferderer as a representative for all the Gold Star Famieelies.
After this, we the families were called up to place dog tags of our lost loved ones on the Soldier's Cross in the center of the memorial.
The ceremony was concluded by a 21-gun salute, taps and a Benedictfion by Chaplain Dan Sweeney of the Bismarck Police Department.
After the ceremony, the Patriot Guard surrounded the memorial to close it off so the families could take some alone time with the memorial and place some personal items inside it.
This tribute was very moving and we appreciate those who feel we should never forget those who sacrificed everything for our freedom. This project was a joint effort of the City of Bismarck, ND and the ND National Guard.
"We will always remember. We will always be proud.
We will always be prepared, so we will always be free."
- President Ronald Reagan 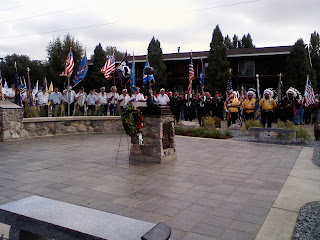 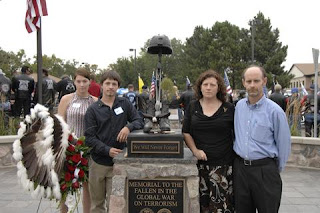