Today I found out that one of the musicians who made an impact on my life, Keith Emerson, had passed away.  I have no words to describe his influence on my listening habits.  He did more than just played keyboards, but composed and arraigned as well as being the ultimate keyboard showman.  As each album of his, whether as the Nice or ELP, I was constantly blown away by the mastery of not only his talent but those he surrounded himself with as well.  He constantly challenged me to widen my definitions of rock, classical, and even jazz music.  I am sad at his passing.


Bruce Pilato, Carl Palmer's publicist released these words from Palmer:
RIP KEITH EMERSON- It is with profound sadness I have to report the death of Keith Emerson last night in Santa Monica, CA. Below is the official statement from Carl Palmer:
I am deeply saddened to learn of the passing of my good friend and brother-in-music, Keith Emerson. Keith was a gentle soul whose love for music and passion for his performance as a keyboard player will remain unmatched for many years to come. He was a pioneer and an innovator whose musical genius touched all of us in the worlds of rock, classical and jazz. I will always remember his warm smile, good sense of humor, compelling showmanship, and dedication to his musical craft. I am very lucky to have known him and to have made the music we did, together. Rest in peace, Keith.
Carl Palmer
March 11, 2016

The Tarkus returns to the sea, defeated 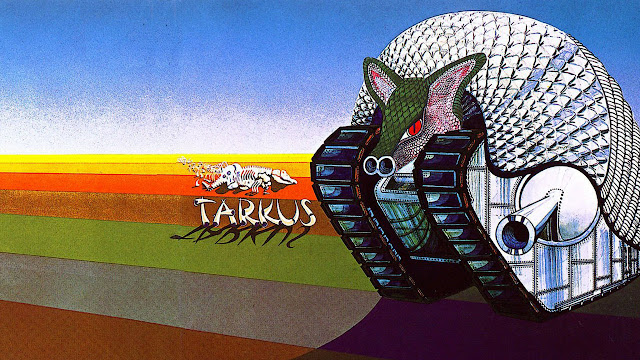 We also say goodbye to one of, and arguably the best, producer and sound engineers of all rock history.  George Martin was also a teacher.  He taught great musicians and engineers.  His work with the Beatles helped four young men find their way as the talent they had screamed to evolve.  George Martin showed them how to use those talents and how to develop them for themselves.  He also took a young man named Alan Parsons and groomed him to be the best he could which became not only the refinment of Pink Floyd's Dark Side of the Moon" album, but led him to create his own expeimental progressive rock band, The Alan Parson's Project. He was 90

Both of these rock giants point out that a major era of rock music is passing.
Posted by Patrick! at 12:30 PM